This project demonstrates that targeting nutrient and herbicide application rates to suit crop and paddock requirements should improve water quality.

Two monitoring sites have been established in the Sandy Creek catchment, south-west of Mackay. The treatments within each site employ different soil, nutrient and herbicide management practices. Rainfall, runoff, water quality and farm operations were closely monitored during the 2010-2011 wet season. This case study outlines herbicide results from one treatment at the Victoria Plains site (uniform clay soil).

Over 30 runoff events were monitored during the 2010-2011 wet season. Runoff from the treatment (runoff plot area approximately 1300 metres square) was measured through a flume with samples collected automatically and analysed for herbicide concentrations.

A total of 3300 millimetres of rainfall was recorded between 1 September 2010 and 30 April 2011, well above the estimated long-term average of 1468 millimetres. This resulted in 1751 millimetres of runoff, with the first runoff event occurring seven days after herbicide application (there was no rainfall recorded prior to the event that caused runoff).

Peak concentrations of diuron and hexazinone were detected at the first cane trash sampling after application, and rapidly declined within 10 days of application. This decline would be due to both decay of the pesticides and rainfall (143 millimetres) washing the pesticides off the cane trash and into the surface soil (some would also be lost in runoff). The calculated field dissipation of diuron and hexazinone on the cane trash blanket was 11 and nine days, respectively.

Diuron and hexazinone were detected in relatively high concentrations in the first runoff event, which was seven days after application. The maximum concentrations for Diuron and Hexazinone were up to 240 micrograms/litre and 100 micrograms/litre, respectively. Concentrations then rapidly declined at a rate similar to the dissipation on the cane trash blanket. By mid-October (within one month of herbicide application), approximately 92 per cent of the total runoff loss of these herbicides had occurred for the wet season, although only six per cent of the season’s runoff had occurred.

As the wet season progressed, more of the herbicide would have moved from the cane trash blanket into the surface soil, reducing the amount of herbicide potentially available for runoff loss. Infiltrating rainfall events prior to runoff help move the herbicide into the surface soil, as was experienced in the 2009-2010 wet season when runoff herbicide concentrations (maximum concentrations of 18 and 41 micrograms/litre for diuron and hexazinone, respectively) were much lower than in 2010-2011.

Monitoring is continuing during the 2011-2012 wet season. Much lower herbicide concentrations are expected this season, as more than 100 days passed between application and the first runoff event. 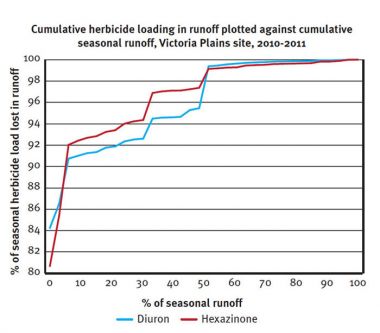 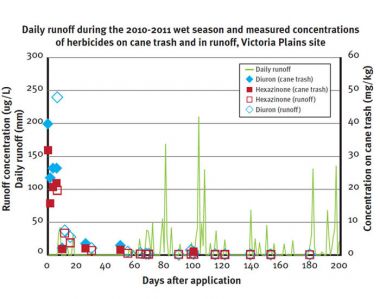