Weeds are a major contributing factor to losses in both production and profits for the sugarcane industry. Although minimum tillage and green cane trash blanketing are considered best practice management in sugarcane, no trash is available for plant cane. In addition, in the Burdekin, bare soil is maintained to allow furrow irrigation. As a result, there are concerns about herbicides being transported to the Great Barrier Reef. Monitoring indicates frequent losses of herbicides in runoff from cane fields in the Burdekin (Davis et al. 2012).

Reducing the use of photosystem inhibiting (PSII) residual herbicides, such as atrazine, diuron, hexazinone and ametryn, and using alternatives such as knockdown herbicides as part of an integrated weed management strategy are considered best practice (Rolfe et al. 2007). Precision application (band spray) is also suggested as an improved practice and can provide large cost savings.

This project measured the amount of herbicides lost in runoff from a standard rain storm applied with a rainfall simulator.

This study was undertaken on a sugarcane field with recently emerged ratoon cane. The site had a clay soil (Vertosol), low slope, no groundcover of trash and no weeds.

The study involved treating plots with different applications of knockdown herbicides glyphosate, 2,4-D amine and fluroxypyr. The herbicide treatments were:

Rainfall was applied at 80 millimetres per hour for 40 minutes, one to two days after herbicide application. Two to four plots of each treatment had rainfall applied using a rainfall simulator. Image: Rainfall simulator in action and collection of runoff samples.

Comparing transport in water or sediment: 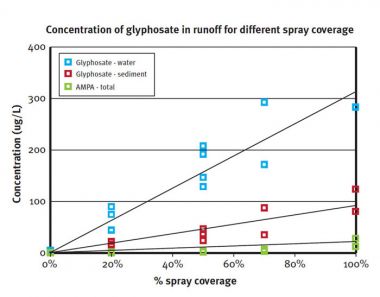 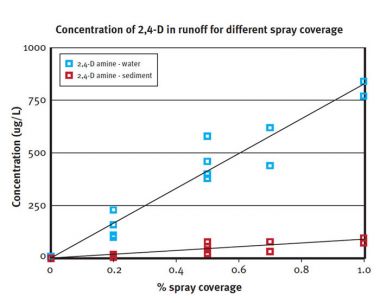 Other ways to reduce/prevent herbicide runoff