Regional report card partnerships are one of a number of activities under the Reef 2050 Long-Term Sustainability Plan and are funded by both the Australian and Queensland governments. They bring together government and local communities including Traditional Owners, industry, farmers and fishers, scientists, tourism operators and conservation groups who have a shared vision for healthy waterways in their region. Each partnership produces an annual report card that outlines the condition of waterways in their region. The data collected also guides management decisions around actions to improve water quality in local waterways that flow to the Reef.

To accommodate issues that are relevant to a specific region, regional report cards are based on subtly different indicators and data sources, but they all seek to:

Most partnerships rely heavily on data from outside sources to inform their report cards although Gladstone does some of its own monitoring. Marine monitoring data presented in the regional report cards includes Marine Monitoring Program data used for the Reef water quality report card, but is supplement by locally-relevant data collected by port authorities and the Australian Institute of Marine Science. In this respect, regional report cards are nested within the broader monitoring and reporting program for the Great Barrier Reef. 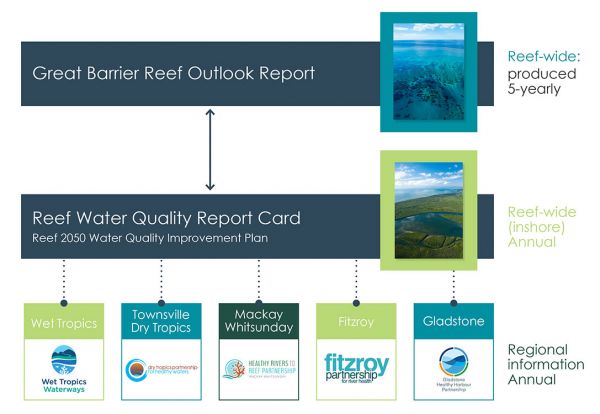 The Wet Tropics Healthy Waterways Partnership, formed in 2015, involves industry, community organisations, research institutions and all levels of government. The Partnership’s objectives are to coordinate the sharing of data, prioritise management actions and communicate (knowledge and results) to the broader community. The report card covers the area from Bloomfield in the north to the Herbert River in the south and incorporates the Atherton Tablelands. It encompasses nine river catchments from the Daintree to the Herbert, eight estuaries and the adjacent marine environment extending to the eastern boundary of the Great Barrier Reef Marine Park.

The Dry Tropics Partnership for Healthy Waters, formed in 2018, is a collaboration involving community, industry, science, and government – partnering to improve the values of the catchments and Reef. The report card provides  information about three catchments (Black, Ross and Bohle), along with the immediate estuarine and marine environments, the Port of Townsville and Magnetic Island. This partnership is unique as it focuses on the Townsville urban area, the largest urban centre in the Great Barrier Reef catchments.

The Mackay-Whitsunday-Isaac Healthy Rivers to Reef Partnership, formed in 2014, involves partners from community, Traditional Owners, industry, science, tourism and government working together to determine how and where more can be done to look after local waterways. The report card covers the geographic area of the Don, O’Connell, Proserpine, Pioneer and Plane basins; the urban area of Mackay; the ports of Abbot Point, Mackay and Hay Point; marinas; and the coastal marine area. It provides information on environmental, economic, social and stewardship indicators as well as cultural heritage aspects of waterways in the region.

The Gladstone Healthy Harbour Partnership, formed in 2013, includes community members, traditional owners, industry, science, government and harbour management. The report card is an independent report that assesses the environmental health of Gladstone Harbour and the social, cultural and economic health of the Gladstone local government area.