Grassed inter-rows in bananas in the Wet Tropics region

Bananas are an important crop in the Wet Tropics and are grown on 11,000 hectares. High rates of nitrogen loss in deep drainage have previously been measured from paddocks receiving high rates of fertiliser nitrogen. Since 1995, nitrogen application rates used by the industry have reduced by as much as 40 per cent (Sing 2012).

The reduced rate and more frequent application of nitrogen under B class management practice produced similar yield, fruit characteristics and ‘follower' sucker growth to that achieved under conventional management. These lower rates of fertiliser application have already been adopted on commercial plantations by some growers without affecting productivity. 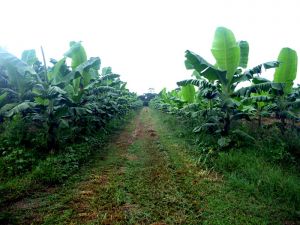 The Paddock to Reef program will continue to measure runoff, sediment and water quality resulting from these two treatments, and gather more information on the productivity and economics of the B and C management practices. For further information on improved banana management practices, see the Monitoring nitrogen losses from bananas in the Wet Tropics region case study.