Drip irrigation on sugarcane in the Burdekin region

All sugarcane grown in the Burdekin is irrigated. Most farms are irrigated by flooding the furrows between the rows of cane, which is labour and water intensive but relatively cheap to establish. Drip irrigation comprises rows of plastic tube buried underground that deliver water directly to the roots of the plant through tiny emitters that regulate water flow. It uses far less water, increases yield and improves the quality of water that runs off farms.

This paddock trial, located in Ayr, tested the production and profitability benefits of converting from furrow to drip irrigation.

The trial was on paddocks producing lower than expected yields due to poor irrigation uniformity and excessive deep drainage. It started in 2008 and covers an area of 6.7 hectares. Drip tube costs up to $3500 per hectare with additional costs for pumps, filters and computerised timers. The higher yields have made quite a difference to the gross returns and the operator believes that if the results of the trial continue, the drip tube will be paid for in less than three years. 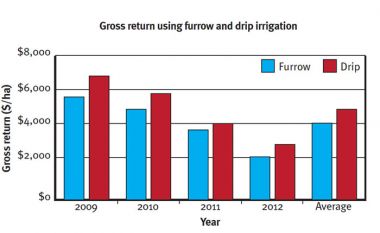 Drip irrigation has allowed the operator to considerably reduce total water use. Monitoring and modelling shows this will reduce water and nitrogen losses to deep drainage on these sandy soils. In addition to reducing run-off, drip irrigation helps place water more accurately in the root zone where the plant needs it, reducing deep drainage losses which can lead to rising water tables.

The operator is continuing to collect additional information on crop yield, water, nutrient and other input costs to confirm the longer-term economic benefits of converting to drip irrigation. Meanwhile, the Paddock to Reef program will continue to measure and gather more information on the deep drainage water and nutrient losses on sandy soils under drip and furrow irrigation.