This case study demonstrates the effect of reduced nitrogen fertiliser rate and different row spacings on nitrogen losses. Increasing the time between fertiliser application and first runoff (allowing time for crop uptake and infiltration into the soil) is important to reduce applied nitrogen losses through surface runoff in ratoon cane crops. Un-degraded urea in runoff was a significant contributor to the runoff nitrogen loads. Applying nitrogen fertiliser at current industry recommended rates (Six Easy Steps) and increasing the time between application and first runoff can have substantial environmental benefits whilst still maintaining economic returns and in some cases, achieving financial savings. Applying fertiliser at rates above recommendations leads to nutrients surplus to crop requirements. This increases the risk of these nutrients being lost to the environment in runoff, which is not cost effective. This is particularly important if significant rainfall producing runoff occurs soon after fertiliser application.

Rainfall, runoff, water quality, yield and farm operations were monitored across four ratoon crops from 2010 to 2014. Each plot was fitted with an automated surface water runoff sampling and monitoring station. Runoff samples were then analysed for suspended sediment and N, including dissolved inorganic N (DIN), dissolved organic N (DON), particulate N (PN) and urea, and total N (sum of DIN, DON and PN).

Rainfall across the monitored years varied. It ranged from 3,190 millimetres between October 2010 and September 2011 (double the long term average) in the first ratoon to 1,390 millimetres between 2013 to 2014 over the fourth ratoon. The highest rainfall year had the highest N losses (average 11.5 per cent of applied N). Overall, the improved management practice treatment had an average 32 per cent less total N lost in runoff compared to the conventional treatment (Figure1). Both treatments had similar proportional losses(Figure 2).

It was observed, that for every additional 21 days between N application and the first runoff event, there was an approximate halving of N loss (DIN and urea) in runoff (Figure 2). Similarly, N loss (DIN and urea) was also halved for every additional 95 millimetres of rainfall (or irrigation) between application and first runoff. 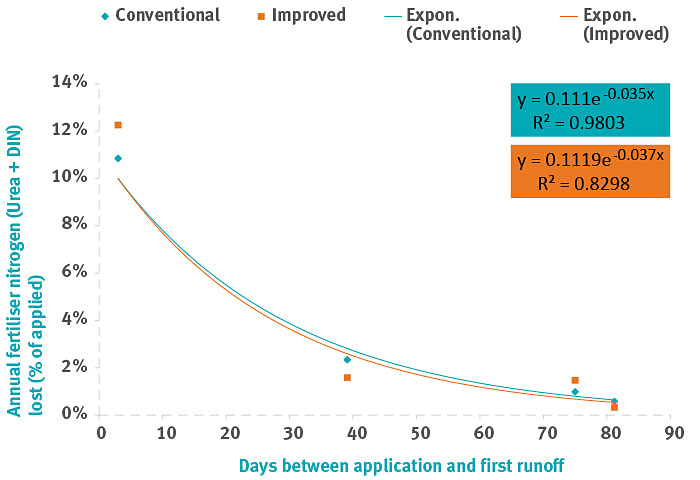 Figure 2: Annual fertiliser N (DIN and Urea, as a % of applied) lost in runoff from ratoon crops under conventional and improved management practices at Victoria Plains, Mackay.