This project trialled a range of nitrogen (N) application rates and a controlled-release N fertiliser (i.e. slow release) on plant cane to understand the impact on surface water runoff, drainage and yield (Figures 1 and 2). The monitoring site was established with GPS guidance on two metre wide beds with dual cane rows (variety Q183). The paddock is situated on a gently eastern sloping (less than one per cent) alluvium floodplain deposit within the South Johnstone drainage basin.

The soil was described as a Bulgan series and a Hydrosol (poorly draining) in the Australian Soil Classification. The total carbon content in the soil surface was more than five per cent.

The paddock was bordered on three sides by large drains more than one metre deep to facilitate drainage and prevent the paddock from waterlogging. This is typical of sugarcane grown in low lying areas throughout the Wet Tropics.

The site was not irrigated.

Method: 2 applications: 34 kg N/ha across all treatments (as DAP & liquid N) at planting on 21 July, followed up with remaining N on 2 October, 2014 (i.e. top dress). Fertiliser was surface applied then lightly cultivated underneath the soil surface.

Samples collected from below the root zone indicated clear differences in DIN losses from each treatment (Figure 6). These treatment differences are evident throughout January and February with average DIN concentrations of 12, 8, 4 and 3 mg/L for Treatments 1 to 4, respectively. By March concentrations had declined rapidly over time and remained less than 1.5 mg/L for all treatments for the remainder of the season.

Water seeping through the soil into the paddock drain had DIN concentrations up to 11 mg/L from the end of the paddock with the higher N treatments, and up to 6 mg/L near the lower treatments. This highlights lateral movement into these drains as a significant loss pathway for DIN.

Harvest of the plant crop took place on 11 November 2015 (Table 2 and Figure 7). In general, the yields for each treatment are considered above average for this paddock compared with accessible crop records. The highest tonnage of cane was from Treatment 1. However, this cane also had the lowest CCS level, and suffered from lodging and suckering. This was a result of the late harvest schedule and high N rate. Some minor lodging was also evident in Treatment 2. 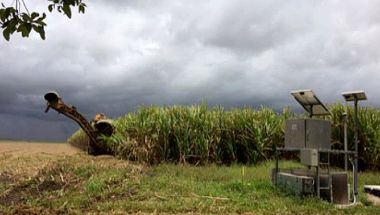 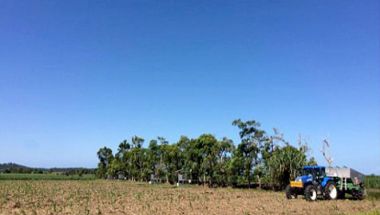 Figure 8: Applying fertiliser treatments to the first ratoon after the plant cane harvest in November 2015. Monitoring will continue throughout the ratoons.

We thank MSF Sugar for supporting this trial through access to their property, crop management records and continued assistance throughout the project.